Exploring patterns of diversity in complex subterranean systems with schizomids

In December 2015, Dr. Danilo Harms presented on patterns of diversity in subterranean systems at the Society of Australian Systematic Biologists (SASB) conference in Fremantle (external link). The project looked specifically at subterranean schizomids, an ancient or old world type of spider, that can be found today under very moist rainforest litter. Here are some subterranean schizomids from the Pilbara region of Western Australia: 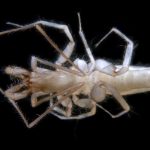 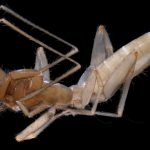 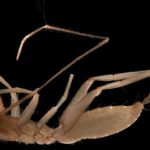 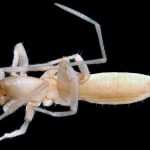 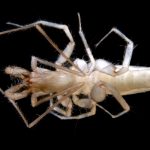 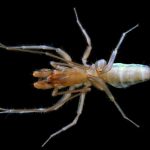 Very few Australian schizomids can still be found on the surface but there are many subterranean species found in the Pilbara. They are likely to have migrated underground from as far back as the middle of the Miocene, a period when Australia began to progressively dry.

By global standards, the Pilbara region of Western Australia is very rich in subterranean invertebrates but little is known about diversity and distributions of troglofauna species. Current research suggests Pilbara troglofauna species are typically constrained to small distributions determined by geological or topographic barriers. The intricacies are poorly understood, but surely are associated with the unique biology of subterranean species and the highly complex underground “matrix” they inhabit. Short-tailed whipscorpions (Arachnida: Schizomida) are diverse in subterranean habitats of the Pilbara. Research in the Robe Valley suggested species are mostly allopatric and confined to isolated mesas, a result of multiple independent colonisations from the surface. However, patterns in the Hamersley Range farther east are markedly different and diverse communities occur with few obvious geological or topographical features that might constrain ranges. We used a dated molecular phylogenetic approach, reconciled with distribution mapping and habitat analyses, to reconstruct the evolutionary history of 13 schizomid species in 80,000 ha of the Hamersley Range. We examined species ranges, relationships and the relative contribution of surface colonisation versus subterranean speciation events. As well as providing a fascinating snapshot of subterranean biodiversity, our results highlight the importance of sampling design in determining species boundaries.

The talk is going to be presented a second time at Fayetteville for the 23rd International Conference on Subterranean Biology (external link). Stay tuned for more photos and the presentation.